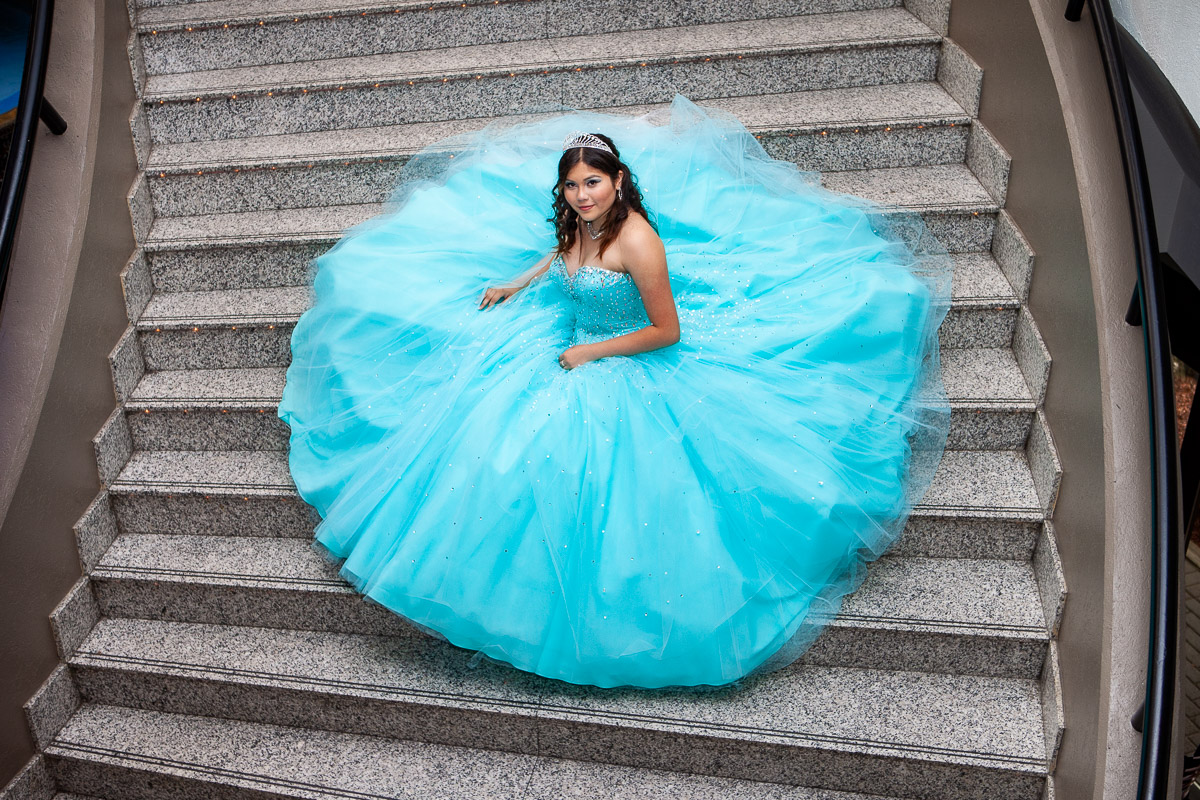 “Bell, Cinderella at the ball…?” As soon as I saw this beautiful 15 year old in her teal coloured dress hovering amongst her guests it was time to celebrate her quinceanera at the Rivera Parque, in Vaughn.

Can you imagine in today’s world giving your daughter away to adulthood as a “woman” at age 15?  Before you think that this is a crazy thought, consider that back in the early 1500’s that is exactly what the Spanish introduced to the Aztec indians, residing in what is current-day Mexico.  Through the Spanish’s culture was born the Quinceanera.  Today the majority of Latin American countries follow this tradition, when their daughters turn 15.  While in today’s world few 15 year old girls desire to get married, they do look forward to celebrating their Quinceanera.

There are several different pieces of this tradition to be followed and appreciated, beginning with a ceremony, where essentially the “quinceanera” (spanish for a 15 year old girl) devotes herself to the Virgin Mary and God.  An important piece is for the quinceanera to select 14 chambelans (boys) and/or 14 damas (girls) to stand by her side as she celebrates this time in her life.  Each of these people represent the 14 previous years of her life.

Other traditions include a dance with her father, signifying his role as the first man in her life.  The dance is typically the Waltz; however, recently the trend has been to adjust to more current times with a dance that represents today’s world.  Food, cakes, gifts and a toast to the daughter highlight other traditions.

Have we mentioned the dress?  This is a tradition that was started by the Duchess of Alba in Spain some time ago.  This is where the new young lady transforms into a Princess, topped with a crown.  As well, by changing her shoes as a ceremonial piece, her parents symbolize her stepping into society to become a woman.

On this night Melanie was absolutely beautiful as she made this traditional transition in her life.  Anytime we get the chance to play our part in freezing these moments in time for our clients we become storyteller’s, letting our images capture the emotions of their special moment.  During the planning phase, Melanie’s parents (Dago & Karen) were so dialled into each and every detail which helped to make this night such a special moment in their daughter’s eyes.

This lady certainly means so much to people she is surrounded by, as the majority of the honoured guests were family who were coming from so many different countries and places to be here.  This was night filled with excitement and pride.  Melanie was super cool to work with when she sang for everyone she certainly honoured the evening.  Surrounded by a countless number of her friends, the energy in the room was quite evident.

When the dancing kicked off, it became quickly apparent that this group had some inspired moves.  We were honoured to have been invited into this family’s life on this night to document this moment for them.  As you look at the images, the energy radiates from each image.  During the course of performing the aforementioned traditions, the quinceanera, brother, mother and father did so recalling many of the previous 14 years leading to this day.

Family Portraits During a Pandemic
July 31, 2020